"She's the girl I want to marry," Jimmy Carter told his mother after his first date with 17-year-old Rosalynn Smith, who had grown up as a friend and neighbor of the Carter family in Plains, Georgia.

Born in Plains on August 18, 1927, Rosalynn was the first of four children in the family of Allethea Murray Smith and Wilburn Edgar Smith. She grew up in a small-town atmosphere that nurtured strong ties to family and dedication to church and community. When she was 13, her father died and her mother became a dressmaker to help support the family. As the oldest child, Rosalynn worked beside her mother, helping with the sewing, the housekeeping, and the other children.

Times were difficult, but Rosalynn completed high school and enrolled in Georgia Southwestern College at Americus. In 1945, after her freshman year, she first dated Jimmy Carter, who was home from the U.S. Naval Academy at Annapolis. Their romance progressed, and in 1946 they were married.

The young couple went to Norfolk, Virginia, Ensign Carter's first duty station after graduation. The Navy kept them on the move. Their sons were born in different places: John William in Virginia, James Earl III in Hawaii, and Donnel Jeffrey in Connecticut. The Carters' only daughter, Amy Lynn, was born in Georgia in 1967.

When his father died in 1953, Jimmy left the service, and the Carters returned to Plains to run the family business. Managing the accounts of the peanut, fertilizer, and seed enterprise, Rosalynn soon found herself working full-time.

Jimmy entered politics in 1962, winning a seat in the Georgia Senate. Rosalynn, an important member of his campaign team, helped develop support for her husband's successful bid for the governorship of Georgia in 1970. During his Presidential campaigns, Rosalynn traveled independently throughout the United States. Her belief in her husband's ability to lead the nation was communicated in a quiet, friendly manner that made her an effective campaigner.

A skillful speaker and a hardworking First Lady, Mrs. Carter managed routine duties and special projects in her office in the East Wing. She attended Cabinet meetings and major briefings, frequently represented the Chief Executive at ceremonial occasions, and served as the President's personal emissary to Latin American countries. 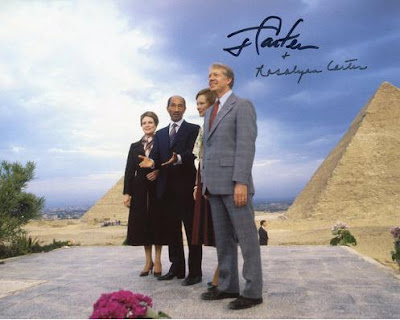 As First Lady, she focused national attention on the performing arts. She invited to the White House leading classical artists from around the world, as well as traditional American artists. She also took a strong interest in programs to aid mental health, the community, and the elderly. From 1977 to 1978, she served as the Honorary Chairperson of the President's Commission on Mental Health.

After returning home, Mrs. Carter wrote her autobiography, First Lady From Plains, published in 1984. She is currently vice chair of The Carter Center in Atlanta, founded in 1982 to promote peace and human rights worldwide. At the Center, she leads a program to diminish stigma against mental illness and to promote greater access to mental health care. She also is a partner with the ex-president in projects to resolve conflict, promote human rights, improve global health, and build democracy in some 65 countries. - Official White House Biography 2008

The Congressional Evolution of the United States of America

Presidents of the United States of America

Capitals of the United Colonies and States of America

Book a primary source exhibit and a professional speaker for your next event by contacting Historic.us today. Our Clients include many Fortune 500 companies, associations, non-profits, colleges, universities, national conventions, PR and advertising agencies. As a leading national exhibitor of primary sources, many of our clients have benefited from our historic displays that are designed to entertain and educate your target audience. Contact us to learn how you can join our "roster" of satisfied clientele today!

Primary Source exhibits are available for display in your community. The costs range from $1,000 to $35,000 depending on length of time on loan and the rarity of artifacts chosen.

No Taxation Without Representation

US Bill of Rights

*Republican Party - - is a defunct political party organized by Thomas Jefferson and James Madison in 1791. The Party went out of existence over the schism between John Quincy Adams and Andrew Jackson (both Republican candidates) over the Presidential election of 1824. Today, for the sake of expediency, political scientists incorrectly refer to it as the Democratic-Republican Party. Party members throughout its existence never utilized the name “Democratic-Republican.”

*** President of the Confederate States of America